The Lacking Visibility of Majority Support is Suppressing Climate Action

We surveyed Americans to understand how our misperceptions of public support are a barrier to climate actions.

Social behavior is contagious. We’re wired to follow the norms that we observe around us. There are evolutionary benefits to this herd mentality. But it can be used against us, too. And that’s exactly what has happened as a result of polluters’ decades-long disinformation campaign.

A new survey by Families For A Future and Helm finds that Americans underestimate the concern and support of the majority on climate change, and that this is a significant barrier to people taking action and pushing for solutions.

A supermajority of Americans (70% or more) are worried about climate change, and support the transition to 100% clean energy. However, many of these Americans perceive support to be much lower. The mistaken belief that one’s personal attitudes are different from the majority’s attitudes is known as pluralistic ignorance. In the case of climate issues, pluralistic ignorance is so extreme that researchers have called it a “false social reality.” Pluralistic ignorance makes it harder to take action because we want to go along with others, and we think most people don’t care as much as we do. But they actually do!

In June of 2022, we surveyed 5,000 Americans to measure pluralistic ignorance, understand who it was most impacting, and gauge how much of a barrier it is to Americans’ becoming more active to stop pollution and advance clean energy.

We found that pluralistic ignorance — and lack of visible social proof more broadly — are the largest barriers to increasing participation in climate action for those who are Alarmed about climate change.

Pluralistic Ignorance exists across all Americans and Political parties

Similarly, more Americans across parties are very worried than believe the average American is very worried. Democrats have the largest gap (26% more), and Republicans have the smallest (11% more).

These parents’ more accurate perception of climate issue importance appears somewhat distinct from the differences observed across age groups. Across age groups, those with children under 18 have higher levels of accurate perception of majority issue importance, and narrower discrepancy between those who say global warming is very important and believe it is very important to the average American, compared to those without children under 18. 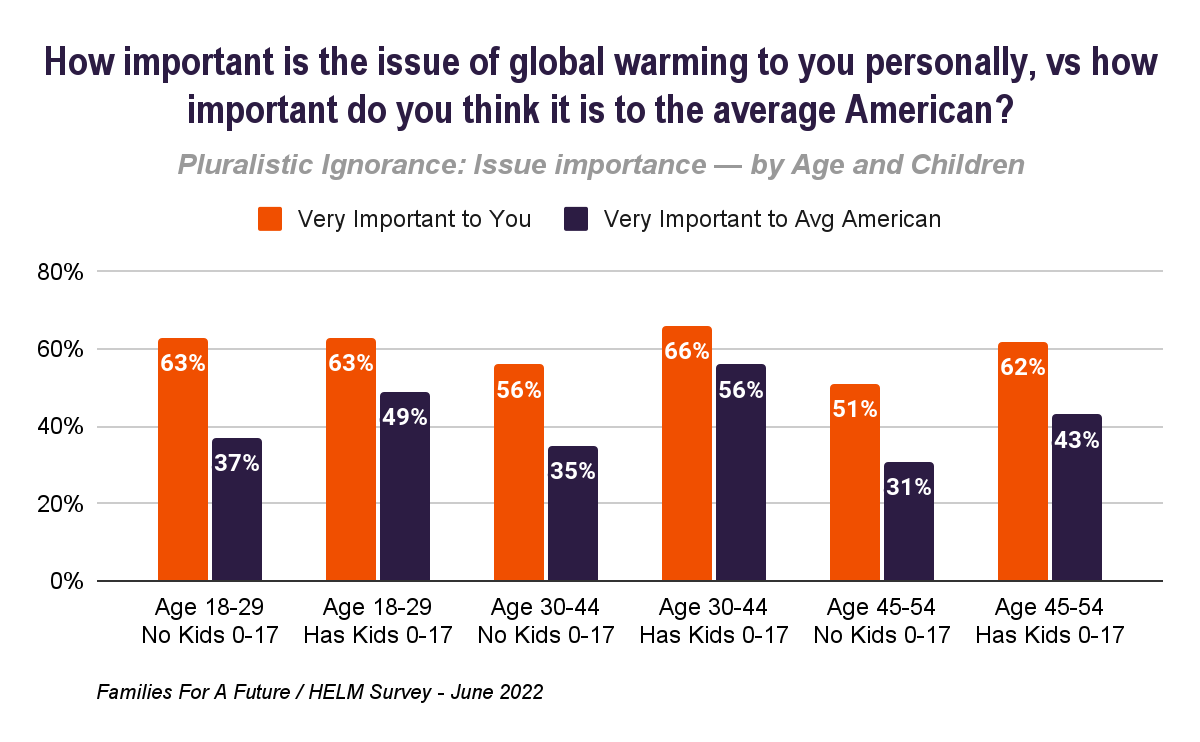 A supermajority of Americans want to do more. The lack of visibility of climate actions and majority support is a significant barrier to action — especially for the Alarmed.

55% of Americans say they are currently doing something to address climate change and pollution. But a whopping 67% want to do more.

Majorities across all parties say they want to do more, including 73% of Democrats, 69% of independents, and 58% of Republicans.

Pluralistic ignorance and lack of social proof are two of the biggest barriers to action nationally, and most significant for those who are already Alarmed.

Among all Americans, “I don’t think others are as concerned as I am” was the 3rd most frequently cited reason for why people aren’t doing more.

The most commonly cited reason is “I don’t know how to help.” This too points to the importance of social proof and visible action. If we don’t see others acting, it’s harder to know what to do ourselves.

What you can do: Act and speak to be seen and heard. Confidently!

Americans’ “false social reality” didn’t come out of nowhere. Fossil fuel polluters spent decades trying to downplay the problem, confuse us on the causes and solutions, and even make us feel guilty about the pollution that they were creating. And they are still doing it. These efforts have had a chilling effect on the level of conversation, action, and accountability directed toward polluters for the damage they are responsible for.

While pluralistic ignorance remains a significant barrier to action, as more and more people are realizing that we are in the majority, we are overcoming polluters’ longstanding efforts to silence us. Each of us can be part of undoing false perceptions by engaging those around us. You don’t need to be a scientist or an expert. You just need to start a conversation that others will be happy to have — because we are the majority after all!

Poll Methodology: The poll was conducted by Helm using a national sample of 5000 adults interviewed online from June 17-18, 2022. The sample was weighted by age and gender based on the U.S. Census Bureau American Community Survey. The margin of sampling error is +/- 1.8% (for the full sample weighted estimates).

Receive New Posts in Your Inbox

Weekly(ish) tips, resources, and stories from parents organizing in their communities, to help you protect your kids and their future.

The Lacking Visibility of Majority Support is Suppressing Climate Action

We surveyed Americans to understand how our misperceptions of public support are a barrier to climate actions.
September 2, 2022
Read More

If our elected leaders don’t now use their power to stop pollution, they are endorsing a devastating future for our families and our children.
June 30, 2022
Read More